Statement on exclusion of allocation of J.P. McManus funding 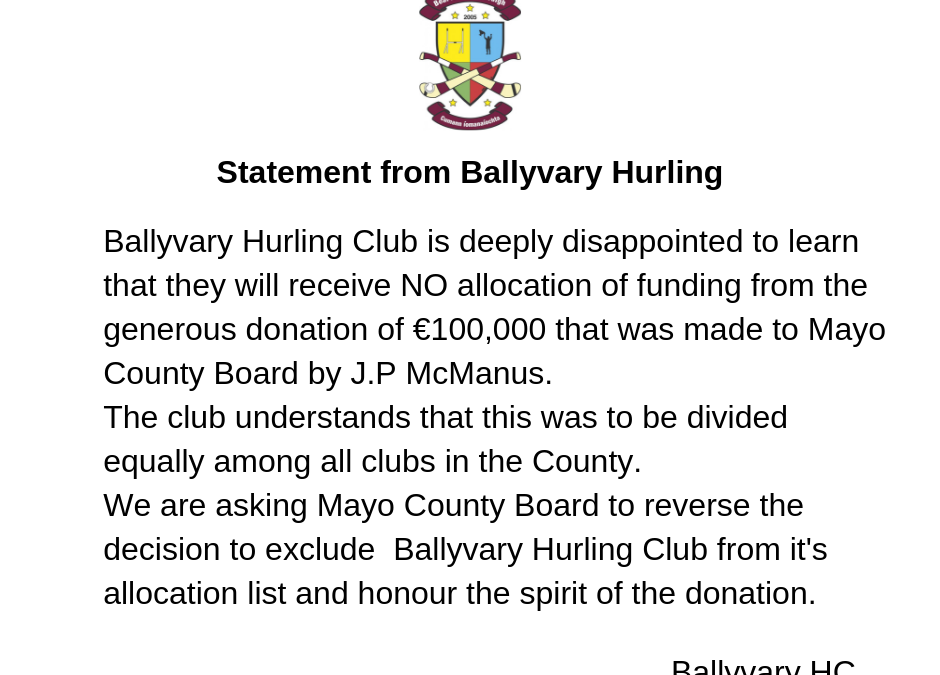 Ballyvary Hurling Club is deeply disappointed to learn that they will receive NO allocation of funding from the generous donation of €100,000 that was made to Mayo County Board by J.P McManus.

The club understands that this was to be divided equally among all clubs in the County.

We are asking Mayo County Board to reverse the decision to exclude Ballyvary Hurling Club from it’s allocation list and honour the spirit of the donation.

“In reply to the overwhelming response, messages of support and queries received in relation to the Mayo GAA allocation of the JP McManus funding, we would like to offer the following clarification.

“Ballyvary Hurling Club await a written response as to why we were excluded from the donation given by JP McManus to the Mayo County Board. We have been informed that it was a decision and not an omission or error on the part of the County Board. Without speculating any further as to the “Why” we will allow the Mayo County Board the opportunity to explain their decision making process on the matter.

“What we can confirm is that there are 50 GAA Clubs listed on the Mayo GAA Website. 48 of those clubs were notified on Thursday September 27th last that they would each be receiving a sum of €2083.34, an equal division of the €100,000 donation from JP McManus to be paid by EFT in the coming week.

“The two clubs listed on the Mayo GAA website that the Mayo County Board did not allocate any of the funding to were Ballyvary Hurling Club and Caiseal Gaels. Both clubs are hurling clubs directly involved with the promotion of Gaelic games at an underage level in Mayo, participated in County Board ran competitions in 2018 up to U21 level and were host clubs for the national Feile na nGael competition held in Connacht in June this year.

“As a small, rural club in central Mayo a windfall of €2,000 would have had a huge impact on our ability to deliver the best possible coaching to the most important asset of our club – the children aged 5-14 who turn up every week with smiles on their faces to try and improve their skills, make new friends and have fun in a safe and positive environment.

“We await a written response from Mayo GAA on the matter.”